Education accounts for the largest amount of public expenditure in Africa. However, its financing remains insufficient and ineffective. Finding ways to optimize public spending on education and to leverage additional resources and alternative financing tools is imperative if we are to guarantee high-quality schooling to the millions of children on the continent, especially the poorest.

Between 2000 and 2014, Africa experienced annual economic growth of 4 to 5 per cent (1), among the highest rates in the world. However, the cumulative effects of the COVID-19 pandemic, population growth, and the expansion of access to education are placing heavy demands on education systems.

Education in Africa: massive funding, but still not enough

African governments allocated on average almost a quarter of their current expenditure to the education sector in 2015 (2), making education the largest single public expenditure item on the continent. Households are also heavily involved in financing education. In Africa, families contribute about 30 per cent of the total national expenditure on education, even though their means are extremely limited.

Despite the very high priority given to education by the state and households, the resources allocated to the sector on the continent are not sufficient to ensure high-quality education for all. As a proportion of domestic wealth, the resources available for education average about 4 per cent, whereas at least 6 per cent is needed to finance adequate education services.

Improving the financing of education is not just about increasing the sector’s budget. It is first about maximizing efficiency in the use of public education resources. In Guinea, for example, almost a third of the resources invested in primary education is ‘wasted’, largely because of children dropping out of school and/or repeating grades (3).

More efficient use of public funds is not only a means of optimizing educational outcomes, it is also a duty to taxpayers, and it sends a strong signal to funding partners. Ensuring greater transparency in how the education budget is spent, fighting corruption, and optimizing the governance mechanisms of education systems, are all powerful drivers for increasing national revenues.

There are also significant disparities in resource allocation in Africa. On average, the richest households capture 8.6 times more public resources for education than the poorest (4). Redirecting these resources toward the most disadvantaged would be a way to better distribute funds. On the continent, schooling difficulties particularly affect underdeveloped, rural areas with poor social infrastructures and a lack of teachers. Targeting these areas will help reduce social inequalities.

Where can additional funding for education be found? All stakeholders agree on the need to involve the private sector more in the funding of education services. Financing tools exist, notably for vocational training and higher education. Through the development of public-private partnerships, companies participate in the financing of courses of study in line with the economic demand in countries, thus enabling them to meet their own labour needs. Some governments go further by creating regulatory mechanisms, such as introducing an apprenticeship tax for companies

.... and expanding the domestic resource base

Although African states allocate almost a quarter of their budget to education, the amount remains low in absolute terms because the countries’ own budgets are insufficient. Increasing the domestic resources of African states through economic growth and tax revenue is a key way of improving education financing. The International Commission on Financing Global Education Opportunity has estimated that 97 per cent of resources for education should ideally come from domestic resource mobilization (6).  On average, low-income countries have a tax-to-GDP ratio of 17 per cent compared to 34 per cent for member countries of the Organisation for Economic Co-operation and Development (OECD) (7). According to the Global Partnership for Education, increasing this ratio by five percentage points would allow most countries to double their spending on education and other essential services over the next few years.

Several measures can be considered: broadening the tax base, improving the taxation of industries and multinationals, supporting fairer property taxes, and fighting tax evasion. 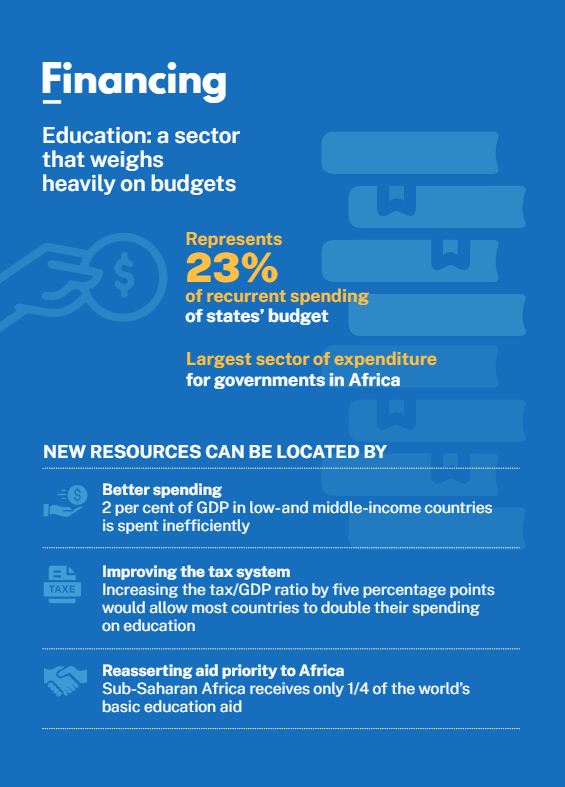 Advocating for the renegotiation of public debt

Excessive public debt forces states to cut spending on public services. In some extreme cases, such as that of Ghana, more than half of national revenues are lost to debt repayment. According to the International Monetary Fund, in 2020 half of low-income countries are close to debt distress or have already fallen into it. In Sierra Leone, the amount needed to service the debt is roughly equivalent to the 2019 education budget (5).

External aid to African countries has declined since the financial crisis of 2007–2008. It is likely to decrease further because of the COVID-19 pandemic and the associated debt crisis. In 2019, official development assistance represented 0.3 per cent of the gross national income of the member countries of the OECD Development Assistance Committee (8). While this level of funding has been stable over the past decade, it remains far below donor countries’ commitments of 0.7 per cent. The international community can still make significant improvements. Moreover, this external aid should be better targeted geographically. Sub-Saharan Africa receives only a quarter of the world’s aid for basic education, even though the needs are greatest there.

These options have considerable potential for improving the financing of education in Africa. Some countries are already taking steps to improve the efficiency of their spending through a more equitable allocation of teachers and materials to schools. The involvement of the private sector is now at the heart of strategies to renew vocational training policies. This alternative and additional funding must be vigorously pursued as it is essential to achieve SDG 4 by 2030.

Education is paying the price of COVID-19?

Public funding for education is likely to decline in the coming years. While the COVID-19 pandemic represented a loss of learning time of rare magnitude, the crisis is also having a major impact on education funding. Containment efforts to stop the spread of the virus led to a major economic slowdown in sub-Saharan Africa in 2020, with growth rates of −2 per cent according to the World Bank1, leading to the continent’s first recession in 25 years. Government revenues are therefore being impacted, as is the level of public spending. Projections2 indicate that education expenditure per capita for the region may have fallen by 4.2 per cent in 2020 and stagnated in 2021. Meanwhile, COVID-related spending will further widen the education funding gap in low- and middle-income countries.

Prior to the pandemic, UNESCO estimated that there was an annual shortfall of US$148 billion in the amount needed to achieve SDG 4. This shortfall was recalculated in September 2020 and had increased by one-third, or an additional US$30–40 million per year. Low-income countries are the most vulnerable. They may also suffer from a reduction in public development aid if donors shift their budget priorities to meet their domestic needs, or to other sectors, such as health.

School fees, school supplies, additional costs... African households spend an average of 4.2 per cent of their annual budget on education, according to a study covering some 15 African countries by IIEP-UNESCO Dakar3. In doing so, they contribute to almost a third of national current expenditure on education. Nevertheless, this expenditure is poorly directed. Families contribute more to the financing of primary education than to that of higher education. On the one hand, this is inequitable: the representation of students from the most advantaged social segments is greater in higher education, the education sub-sector that receives the most public resources. On the other hand, it is inefficient: the return on investment in education is greater for higher education graduates than for secondary school graduates, who are themselves more ‘profitable’ than primary school graduates.

To reconcile efficiency and equity, the relative effort of households to finance education should therefore increase with the level of education. African policy-makers would benefit from promoting mechanisms that encourage substantial household investment in higher education. This is already the case in countries that have gradually replaced very generous but poorly targeted scholarships with well-controlled loan schemes. Furthermore, a more active redistribution policy of educational resources should be encouraged. This would favour access to basic education for the poorest through the establishment of support funds financed by increased household expenditure on higher education.

Equipping the stakeholders who finance education: Focus on our action

Good financial management and budgeting are essential to the achievement of educational goals. Strengthening the capabilities of African education administrations to understand these issues is at the heart of IIEP-UNESCO Dakar’s mandate. The issues of costs and of the financing of education are core topics within the training courses for managers and technical staff in the sector. This is the case with the training programme on policies for education sector management. Similarly, the methodologies developed by IIEP experts aim to provide countries with robust tools for anticipating needs and optimizing education resources. These themes are dealt with in detail in the methodological guides for sector analysis co-developed by IIEP-UNESCO Dakar and used throughout the continent.