Improving the management of TVET trainers

IIEP conducted a study in Benin, Ethiopia, Madagascar, and Senegal on the management systems of TVET trainers and supervisory staff. In all four countries, the competency-based approach was adopted, and the forms of training involved the company (dual training, apprenticeship, renewed apprenticeship, etc.).

The study showed that the systems in the four countries have real potential for developing their trainer management systems. These include the Mirador platform in Senegal, which allows for rational and transparent career management; the incorporation of experienced artisans as trainers on a part-time basis in Benin; and Ethiopia's commitment to raising the level of all trainers' grades.

The study also points to a series of weaknesses to be overcome. Overall, countries have limited capacity to plan for the needs of trainers and supervisors. While promising economic sectors are well identified, the link with the profiles of trainers to be recruited and their training is not sufficient. In the four countries, there is also a lack of job descriptions for trainers and supervisory staff, as well as limited use of educational technologies to strengthen trainers' capacities.

"The pitfalls identified in this study require a strong political commitment from decision-makers," said Ibrahima Diallo, IIEP-UNESCO’s specialist in insertion and employment. "This will strengthen the beneficial links between the world of work and the education and training systems," he concluded. 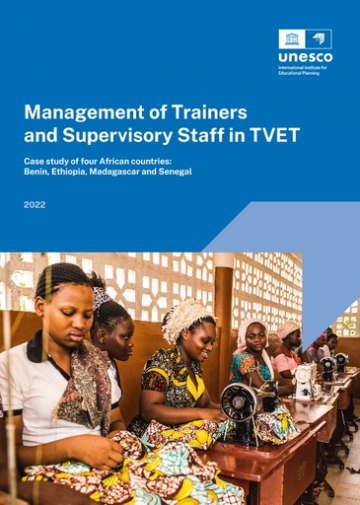