Gender and education: what about the ministries? The case of Burkina Faso

Gender awareness, the proportion of male and female teachers, gender mainstreaming in education policies... to what extent do the staff of ministries of education grasp these key notions and figures, and their subtle underlying issues? In Burkina Faso, the Ministry of Education, Literacy and the Promotion of National Languages (MENAPLN) (recently conducted a Participatory Gender Diagnostic, with the support of IIEP-UNESCO Dakar, to identify good practices, shortcomings and avenues for progress in terms of gender equality and the mainstreaming of gender. Carried out within the framework of the Gender at the Centre Initiative (GCI), this exercise aims to promote concrete and effective integration of gender equality and equity at the different levels of the country's educational administrations.

In Burkina Faso, significant efforts have been made over the past ten years to promote gender equality and equity in education. This political will has been reflected in a National Strategy for Accelerating Girls' Education for the period 2011-2021 and the current National Gender Strategy for 2020-2024. It was also demonstrated, in 2014, by the creation of a Directorate for the Promotion of Inclusive Education, Girls' Education and Gender within the MENAPLN. To give just a few examples, the Ministry of Education now involves gender specialists in the design and revision of textbooks and curricula, to ensure that they are free from gender stereotypes. In addition, since 2019, many ministries in Burkina Faso have begun to implement gender- and child rights-sensitive planning and budgeting, taking into account these two cross-cutting themes in their budgeting process. However, despite this commitment and the significant progress observed in promoting girls' enrolment, significant gender disparities remain in the education sector in Burkina Faso. Literacy, performance in primary school mathematics, access to post-primary and secondary education... inequalities persist in these areas, most often to the detriment of girls and young women. Within the education system, too, women are in the minority in the teaching force - especially at post-primary level - and under-represented in strategic positions in the ministry.

How to explain and fill the gaps?

To find answers and levers of action, the Burkinabe Ministry of Education conducted a Participatory Gender Diagnostic with the support of IIEP-UNESCO Dakar.

400
Burkinabè staff actively participated in the Participatory Gender Diagnostic, both at the central and deconcentrated levels.

Initiated in September 2021, then delayed due to the health, political and security situation, the analysis relied on data collected during two participatory face-to-face workshops, some thirty individual interviews and an online survey of departmental staff. In total, nearly 400 people were actively involved in the gender diagnosis, including departmental officials, school headmasters and teachers. The analysis and recommendations are also based on an extensive literature review.

IIEP has a long tradition of institutional analyses in the field of educational planning. In recent years, these studies have used sound frameworks and methodologies to guide the analysis of the capacity of ministries of education to plan, monitor and evaluate education policies in general. Until now, this approach has not specifically accounted for how gender is considered in the operation of ministries and the implementation of their mandates. Nor of their capacities to promote gender equality and equity in and through education. To what extent does the interaction between formal structures and informal rules contribute to creating, reproducing or, on the contrary, combating gender biases that may affect the functioning and effectiveness of ministries of education? This is precisely what IIEP Dakar is seeking to study in the framework of the DPG. 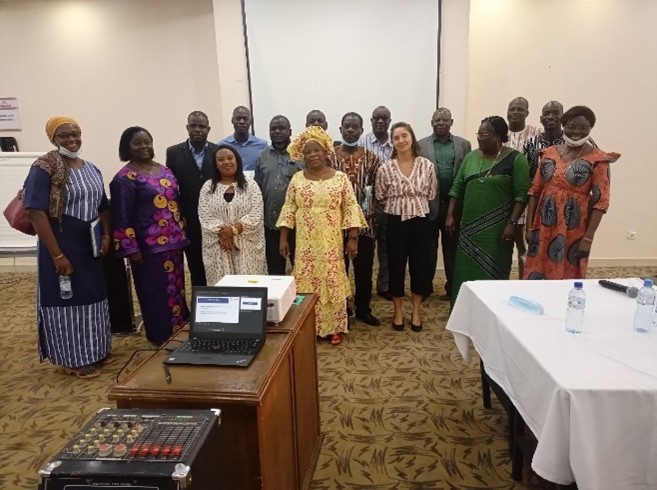 To build this specific methodology, IIEP's Gender at the Centre team also drew inspiration from the International Labour Office's participatory gender audits, which have been proving their worth for several years. The analysis conducted in Burkina Faso takes into account three complementary dimensions of the gender issue :

In other words, this participatory diagnosis sought to address the gender issue through areas that were not immediately visible, notably by unpacking employees' perceptions of gender stereotypes. "When a mother works, their child suffers", for example, or "Men make better business managers than women".

The diagnosis reveals a low level of gender awareness within the Ministry of Education. The data collected illustrates the existence of several gender stereotypes to the detriment of women. A large majority of men and women stated that they agreed with several of the stereotypes stated, showing a refusal to take a clear stand on the ideas put forward.

In the workplace, gender awareness is about recognising and defending the needs and interests of one's own gender group, while at the same time being able to identify privileges, differences, and discrimination against the other gender. Within ministries, achieving a strong awareness and clear perception of gender inequalities is a key step for staff and the institution to drive change.

In order to be able to act on inequalities, education actors first need to be able to recognise and free themselves from gender stereotypes.

While the online survey showed the importance attached by ministry staff to strengthening gender equality in education, almost half of the respondents felt that their capacity to address these issues was "fair" or "poor". The diagnosis also shows that few staff members have been trained in gender issues, particularly at the decentralised level.

Among other limitations highlighted by the diagnosis, the very high number of strategies conducted by the Ministry - more than a hundred in total - contributes to the dispersion of gender-related efforts. The analysis also reveals that the National Gender Strategy 2020-2024 is not well known among staff. Because it is not sufficiently promoted internally, the strategy is not sufficiently visible and therefore does not receive sufficient funding to ensure its effective implementation.

32%
of MENAPLN staff who responded to the online survey confirm that they are aware of 'a policy and strategy for addressing gender inequalities in education in Burkina Faso', i.e. only 34% women and 30% men.

Many other aspects were examined as part of this diagnosis, the main lessons of which were presented at a workshop in Ouagadougou on 13th June. Following this meeting, a report will be officially submitted to MENAPLN. It contains guidelines for taking advantage of good practices and improving the capacity for gender mainstreaming, by building staff capacity on these issues and accompanying the transformation of the institutional culture.

IIEP mobilised its skills to support us in carrying out this Participatory Gender Diagnostic, which resulted in a very rich report, the first version of which was well received by the technical and financial partners. Very interesting suggestions were made to enable Burkina Faso to accelerate the reduction of gender inequalities in education.

Since 2020, Burkina Faso has participated in the Gender at the Centre Initiative (GCI), which aims to promote gender equality through education and in African education systems. Coordinated by the United Nations Girls' Education Initiative (UNGEI), this programme is led by IIEP-UNESCO Dakar for its technical component in support of ministries of education. It is within this framework that this diagnosis is carried out. 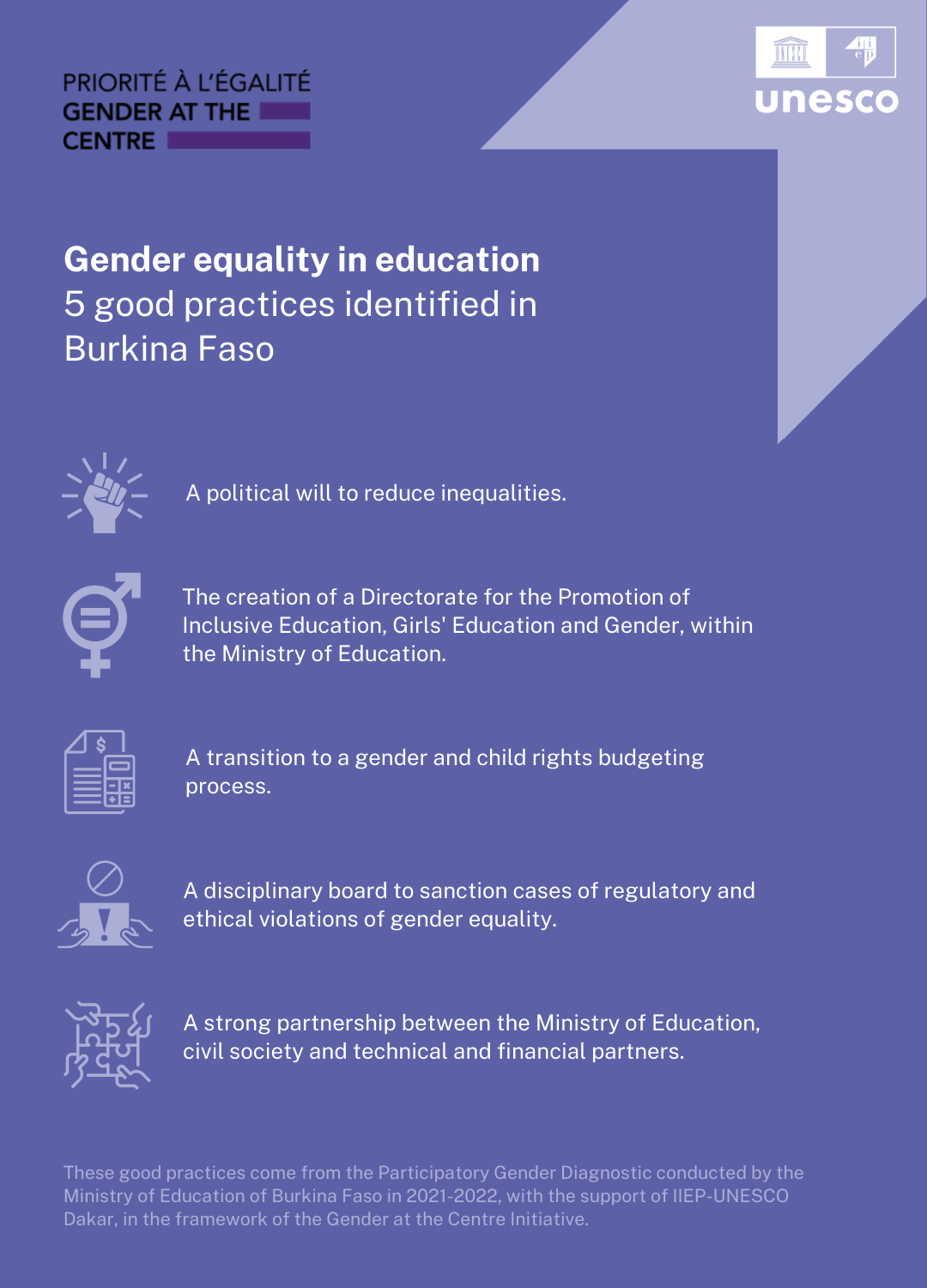